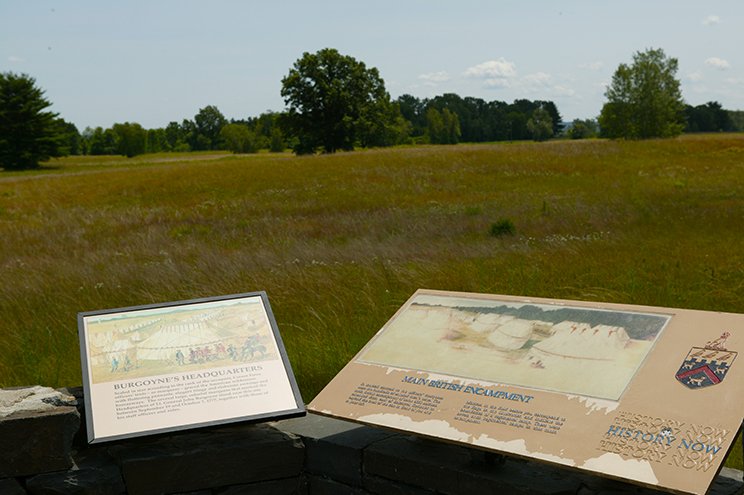 The wayside exhibit marked by the large flags in the field indicates the approximate location of General Burgoyne’s headquarters. It was located near a spring, no longer visible from the surface, but from which water for today’s Visitor Center is drawn.

Between September 19th and October 7th, 1777, General Burgoyne occupied several large tents, known as “marquees,” using them as his office and headquarters, as well as his bedroom and dining room. Such an assemblage was common for general officers’ field headquarters in the 18th century.

Spread out through the fields and woods on either side of you would have been the camps of the British 9th, 21st, 62nd, and 20th Regiments, with the Brunswick regiments von Riedesel and Specht, for a total of some 4,000 men.

The soldiers would occupy small canvas “wedge” tents, roughly the size of a modern pup tent expected to shelter two people. In the armies of the 18th century, such a tent would be shared by 5-6 men. These tent mates would also share a small iron cooking kettle, cooking much of their own rations collectively. They would share the carrying of the tent poles, canvas, and kettle while on a march. Each group was known as a “mess.”

The gray poles with yellow panels mark the boundaries of the 20th Regiment’s camp in the field in front of you. Along the southern edge of the field, you can see the white posts with red tops. These indicate the main British line as it stood, overlooking the ravines during the period between the battles.