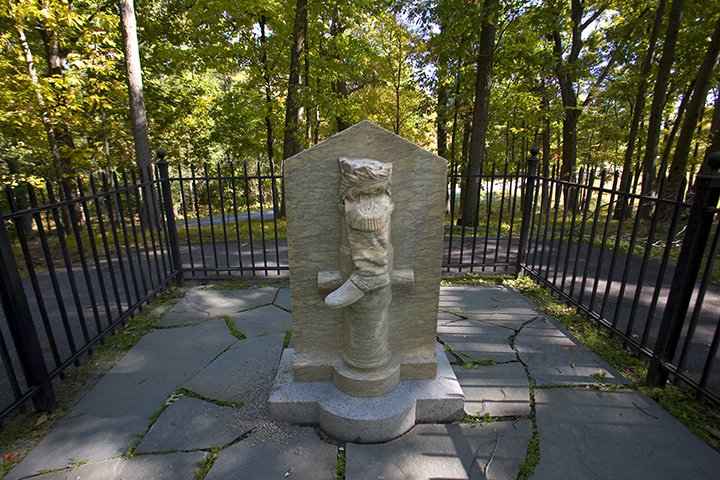 The British army dug in after the fighting of the first battle on September 19th. Their western flank would be protected by two outworks known as “redoubts.” The larger of the two, the Balcarres Redoubt, was erected on the Freeman Farm, a little more than 500 yards south of here at Stop 6. That strong work was described earlier.

The second, known as the Breymann Redoubt, after Lieutenant Colonel Heinrich C. Breymann, commander of the Brunswick grenadiers, ran roughly north and south along the crest of the rise to your left. It was of lighter construction, apparently rail-like logs piled between uprights, with no earth packed against the outside. Mounting two 6-pounder cannon, it was about 300 yards long.

On the morning of October 7th, many of the Loyalists and Brunswickers manning this redoubt accompanied General Fraser’s corps, which was to again probe the American left. This would leave a mixed group of only 200 Brunswick grenadiers, jaegers, and Loyalists to defend it.

After General Fraser’s corps was stopped that afternoon in the wheatfield, most of the survivors retreated to the stronger Balcarres Redoubt, which was closer. The Breymann was then seriously undermanned. While the British and Germans retreated into their works, fresh American troops arrived from the American camp at Bemis Heights.

Brigadier General John Patterson’s brigade, one of John Glover’s regiments, and the 5th and 6th Massachusetts from John Nixon’s brigade brought the number of Americans on the battlefield to more than 8,000. While General Poor’s men fought and died in front of the stronger Balcarres Redoubt, General Learned’s and Colonel Morgan’s men, reinforced by the fresh Massachusetts regiments, deployed to attack Burgoyne’s right flank, consisting of the Germans in the Breymann Redoubt and two companies of Canadian militia in the log cabins between the redoubt and the Freeman Farm.

The Canadians were soon driven from their posts, exposing the left and rear of Colonel Breymann’s position. The Americans then mounted a massive attack on the Germans. While most of the men stormed the front of the redoubt, a part of General Learned’s command and some riflemen swept through the gap left by the Canadians and into the Germans’ rear.

During the final minutes of the attack, as remnants of Colonel Breymann’s corps made their last, desperate stand, General Arnold, who had been leading Poor’s troops in a series of futile and costly attempts to carry the Balcarres Redoubt, heard the firing on his left and joined a party of riflemen firing into the Germans from the rear. Just as the defense collapsed, he suffered a leg wound, now memorialized by the famous Boot Monument on the battlefield.

Colonel Breymann, desperately trying to prevent his men from fleeing at sword-point, was shot, many believe by his own men. Darkness ended the day’s fighting.

Possession of the Breymann Redoubt opened the right and rear of Burgoyne’s camp to the Americans. That night, leaving their campfires burning, the Royal Army withdrew under cover of darkness to the Great Redoubt overlooking the river road, where lay their hospital, artillery park, and supply depot.

Along the path, on the southern end of the redoubt, is the granite Boot Monument. The inscription on one side details the actions of General Benedict Arnold at the Breymann Redoubt. The other side is a relief carving of a left boot draped over a cannon barrel, muzzle down, a sign of defeat or disgrace. The boot is topped with a Major General’s two-star epaulette and a crown with laurel wreath. General Arnold’s name does not appear on the monument.