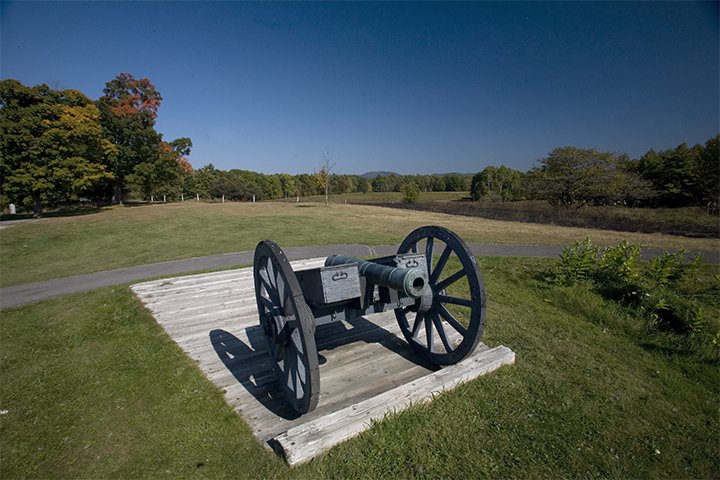 John Freeman and his family established this small farm about 11 years before the battle. Of loyalist sympathies, Freeman had to abandon the farm and move his family to Canada. He returned with Burgoyne as a member of a Loyalist regiment, known as Jessup’s Corps. His small cabin stood just beyond the two artillery pieces you see on the left.

We are a little more than a mile north of the American lines, and about the same distance from the Hudson, to the east.

On September 19th General Burgoyne advanced, deploying a 3-column movement toward the American position, whose extent and strength were unknown to him.

The center column, led by General Hamilton, consisted of 1600 men with 4 cannon, including the battalion companies of the 9th, 20th, 21st, and 62nd Regiments of the British line. Burgoyne accompanied this element.

The left column was commanded by General von Riedesel, and included the German regiments of von Riedesel, Specht, von Rhetz, Hesse-Hanau, dragoons, light infantrymen known as chasseurs and jaegers, 6 battalion companies of the British 47th Regiment, and 8 cannon. The Germans had been sent to American by contracts between their duke and King George III of England, who was also the Elector of Hanover, one of many German city-states.

General Fraser’s column marched along the road running westward from the river road to a point 3 miles from the river, and then turned southward. Hamilton’s column followed Fraser’s a short distance, turned south at the first road, and marched to the Great Ravine, crossed it, and moved west to a point north of the Freeman Farm. General von Riedesel’s column marched out along the river road. When the columns reached their assigned positions, a signal gun would coordinate a simultaneous movement against the Americans.

At about noon, part of Morgan’s corps fired upon and killed or wounded most of the advanced guard of General Hamilton’s column in the Freeman Farm clearing. The riflemen rushed forward to pursue the survivors, and ran head-on into the main body of Hamilton’s division. The British drove Colonel Morgan’s men south of the farm, where they scattered.

Morgan was chagrinned by the sudden disorganization of his command, but with the persistent use of his turkey call he rallied the men and deployed on the fringe of the farm clearing. After a brief lull, during which the New Hampshire regiments joined the riflemen, the fight resumed.

For more than 3 hours, the battle rolled back and forth across the weed-grown, stump-studded farm. The American troops, most of whom were veterans regulars, deployed, attacked, retreated, and rallied in a disciplined and soldierly manner. The British regiments upheld the great traditions of their service, counterattacking again and again with the bayonet, against increasingly heavy odds. But all their gallantry and skill were inadequate to counter the Americans’ numerical advantage and superior firepower.

At around 6 PM, in response to an urgent order from General Burgoyne, General von Riedesel’s Germans appeared from the east, colors flying, singing hymns. Fresh troops from the Regiments von Riedesel, von Rhetz, and Pausch’s Hesse-Hanau artillery engaged the American right in support of the slowly retreating British. The newly reinforced ground forces rallied, delivering yet another bayonet charge, and at dusk, the Americans withdrew to their fortification on Bemis Heights.

Both sides claimed victory. Burgoyne remained on the field of battle. Gates still blocked the road to Albany.

The British would spend the next 17 days erecting fortifications facing those of the Americans. Their western flank would be protected by two redoubts. One would be a very formidable work, its outline appearing as white posts with red tops. It would become known as the Balcarres’ Redoubt, after Major Alexander Lindsay, the Earl of Balcarres, who commanded the light infantry defending this work. Built of horizontal logs, it was nearly 500 yards long, and mounted 8 cannon. It was to this position that most of the survivors of the fighting in the Wheatfield on October 7th fled.