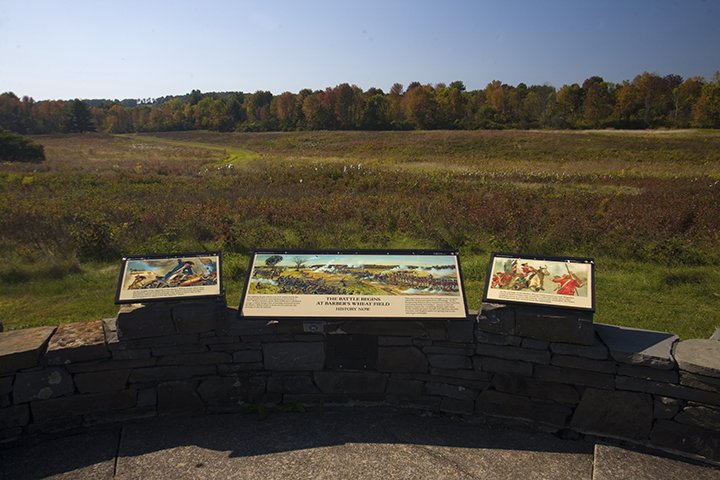 In front of this small rise is a small field bisected by a road running east and west. The northern half of the field was ringed with a worm fence, and contained a small farmhouse, which the Germans referred to as the Weiser House. The southern part of the field was planted with corn, referred to by some Europeans as “Turkish wheat.” Further west was a small strip of brushy woods; then, another field can be seen.

On October 7th, General Burgoyne ordered a reconnaissance in force to probe the American position from the high ground west of the Neilson Farm. If conditions proved favorable, he would launch an all out attack on the 8th. If not he would retreat, and try to save his army. It was a gamble, but Burgoyne was proud, brave, and an old gamester.

The probing force was carefully chosen for mobility and shock power. From General Simon Fraser’s advanced corps came the British grenadiers and Light Infantry, Burgoyne’s elite units, and the 24th Regiment. Also from the advanced corps came the German jaegers, chausseurs and grenadiers, men who would have been the pride of any European army. Men from the Hannau, Rhetz, von Riedesel, and Specht regiments were drafted from the German General Baron Frederick Adolph von Riedesel’s division. Brigadier General Hamilton’s division contributed men from the 9th, 20th, 21st, and 62nd British Regiments. Ten cannons served by 107 artillerymen accompanied the column.

Over 1700 officers and men, including General Burgoyne himself, marched out of the camp, leaving the remaining forces to man the fortifications and await the outcome of the probing action. When the advanced guard reached a point west of the Barber Farm, the column halted. While officers tried to scan the American works through the telescopes from the cabin’s roof and soldiers foraged for grain in the abandoned fields, the British forces dressed into lines behind the worm fence.

The British front, which extended from the woods west of the Barber Farm to the southern fringe of the Freeman Farm was mostly open, but the flanks rested in the woods. James Wilkinson, the American Deputy Adjutant General, reported the British position to General Gates saying, “They are foraging and endeavoring to reconnoiter your left, and I think, sir, they offer you battle.”

Gates asked, “What is the nature of the ground, and what’s your opinion?” Wilkinson replied, “Their front is open and their flanks rest on woods under cover of which they might be attacked. Their right is skirted by a lofty height. I would indulge them.” “Well then, order on Morgan to begin the game,” Gates answered.

The American attack opened between 2:30 and 3:30 PM. Colonel Morgan’s corps of riflemen and light infantry under Major Henry Dearborn struck the British right, composed of General Fraser’s light infantry and the 24th Regiment. General Enoch Poor’s brigade of New Hampshire men and New Yorkers moved up through the brushy woods behind him and attacked the British grenadiers and the units of General Hamilton’s division. General Ebenezer Learned’s target was the Germans in the center of the column. Learned’s brigade was soon supported by Brigadier General Ten Broeck’s brigade of Albany militia and a regiment from Jonathan Warner’s brigade of Massachusetts militia.

Captain George Pausch of the German artillery, while directing the service of his two 6-pound cannons in a desperate attempt to hold back the American onslaught with canister shot, as if they were two large shotguns, suddenly noticed that his supporting infantry had been driven off. After a gallant scuffle to save his guns, he and his artillerymen were forced to abandon them.

General Fraser’s veterans began to fall before the deadly accuracy of Morgan’s Pennsylvania and Virginia riflemen, who fired from the woods west of the Barber Farm. As the British right was rolled back, General Fraser rode among his men, encouraging and rallying them to maintain their ranks, keep up their fire and make the Americans pay dearly for every foot of ground. But the Scotsman’s efforts were in vain. He could not stop the turning movement. The gallant General Fraser came under the heavy fire of the American riflemen and fell mortally wounded.

While Colonel Morgan and General Poor drove back the enemy’s flanks, General Learned’s brigade struck the Germans who, with both flanks exposed, stubbornly fought them off. In the midst of the attack, Benedict Arnold rode onto the field, and though he had no command, and was confined to camp due to an altercation with his commander, General Gates, led a second assault that caused the Germans to join the general retreat to the Balcarres Redoubt.

By 5 PM the British probing column had lost 8 cannon and had suffered more than 400 casualties. Burgoyne’s advance was thwarted, but behind the strong walls of the Balcarres Redoubt, his soldiers could put up a stiff fight, as Poor’s men would discover.