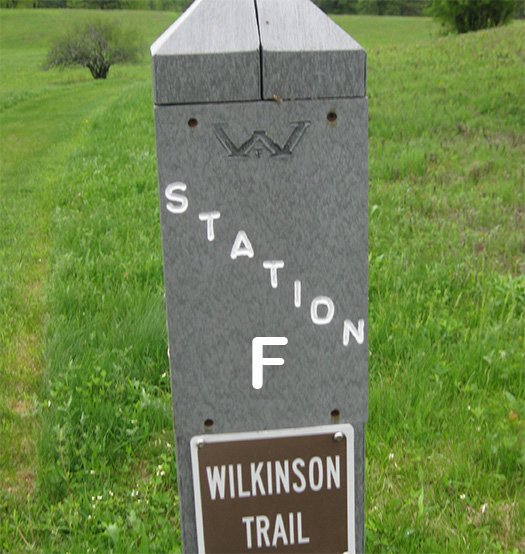 (Narrator)
Here at Station F, turn left on the Liaison Trail.  It goes through the meadow and through a wooded ravine.  After the ravine, the trail reconnects with the main part of the Wilkinson Trail at Station N, where you will turn left again.

(George)
Not a full day has passed since yesterday’s battle and something incredible has occurred.  I have been promoted, and made an officer!  Many officers were wounded or killed in yesterday’s intense fighting, including Ensign Levinge Phillips of the Sixty-Second Regiment.  Ensign Phillips was mortally wounded, then captured by the Rebels.

I have been promoted in his place as an Ensign in the Sixty-Second Regiment.  I am just twelve years old!  Yet, I am a gentleman and must remain calm and live up to the trust placed in me.  I also have faith in my men, with whom I have trained a lot.  Still, though I cannot show it to anyone, (pause) I am scared.

(Mary)
I learned today that Father returned safely after yesterday’s battle, thanks be to God.  I am so grateful he is unharmed!   But others were not so fortunate, for their fathers or husbands did not return.

There was little time to rejoice, however, as I was brought in to work in our camp’s hospital.  I acted as a nurse to help some of the wounded soldiers.  I removed and washed their bandages, and then put them back on the soldiers.  If a soldier develops a fever, I must help bring it down by covering his head with wet cloths to cool him.  It is the easiest job they have me do here.

I now see blood regularly, but I no longer pass out.  There are so very many wounded soldiers.

Earlier today, before going to work in the hospital, Father told me his company’s Ensign, Levinge Phillips, was mortally wounded and captured by the Rebel Americans.  He then told me General Burgoyne gave the position to a boy only 12 years old!  How can a lad just two years younger than myself lead men like my father into battle, just because he comes from a wealthy family.  I hate this place!