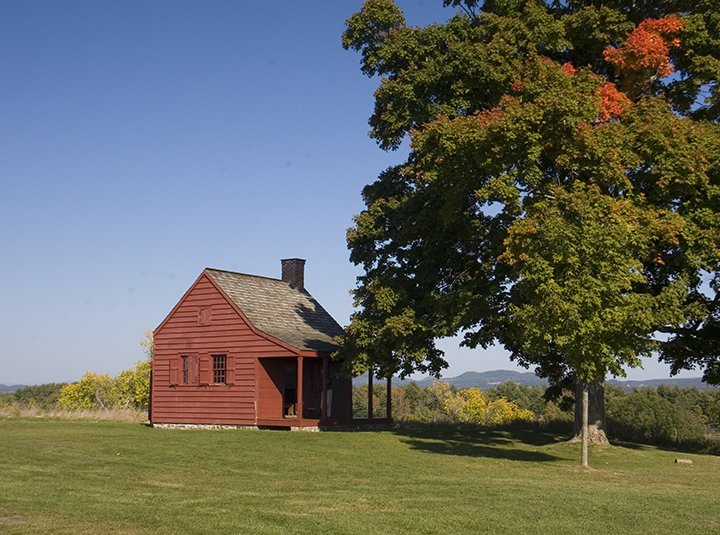 You are now at Stop number 2. The white posts with blue tops indicate the outline of the American fortifications erected in the fall of 1777.

Looking up the ridge in front of you, imagine walls made of horizontal logs with earth packed against the outside, where you see the white stakes. Down the slope, about where we are parked, would have been an abatis of felled trees with their branches sharpened to form a kind of 18th-century barbed wire.

This was the left or western-most flank of the American camp on Bemis Heights. It was this flank, obscured by the heavy forest, that was General Burgoyne’s objective on both September 19th and October 7th, 1777.

Burgoyne hoped that by moving inland from the river road, he could avoid the strong American works that would have made further movement down the river a bloody endeavor. It would be better, he determined, to sweep around the American left and on to Albany with little resistance. The heavy forest you have driven through and effective American patrols prevented any reconnaissance of this area by Burgoyne’s scouts.

On September 19th, 1777, the men who were encamped here advanced to intercept the British and their German allies, in the clearing 1 miles north of these works, at Freeman’s Farm.

From the parking lot, looking up at the ridge, you can see the small red farmhouse of young John and Lydia Neilson, who established this farm in 1777. During the time of the battles, John, a sergeant in the local regiment of militia, was engaged in moving various officers’ baggage with a cart and a team of oxen. He had moved Lydia somewhere south of Stillwater to be out of harm’s way.

The house survived because of its occupation by Generals Benedict Arnold and Enoch Poor. It served as bedroom, dining room, and office for the generals, and that is how it is furnished today, with the personal effects of officers in the field.

The Neilsons returned after the battles and returned the land to farming, successfully raising 8 children here. Some of their descendents still live in the area.

You might enjoy a walk up the path, which is furnished, and opened most days in the summer. Wayside exhibits at the top give an idea of the layout of the American camp. On days the house is open, it is staffed by a park ranger who will be glad to explain, in depth, the people and the events that made this area significant. The rangers here are sometimes outfitted as Army of the United States soldiers and are pleased to explain what they can of the soldiers’ experience.

The furnishings of the Neilson House make an interesting contrast with those of the modern military headquarters. Officers tried to maintain a semblance of the lifestyle to which they were accustomed, and brought with them camp chests filled with the decanters and wine glasses that are seen on the tables. The cumbersome camp cots or rope beds can be seen in place of their more practical counterparts. The crudely drawn map on the table is a replica of one drawn by Colonel Rufus Putnam of the 5th Massachusetts Regiment while here in Saratoga. No elaborate communications devices can be seen. In their place is the duty drummer at the front door who would beat the proper commands when necessary.

This ridge was the scene of hectic activity during September and October 1777. More than 1200 men of General Poor’s brigade, consisting of 3 New Hampshire regiments, and 2 from New York, were encamped just south of the Neilson House, to your right. A few hundred yards further along this ridge to the south stood the headquarters of Major General Horatio Gates, the house belonging to Captain Ephraim Woodworth of the local militia. His barns housed the American field hospital.

Just north of the Neilson House, in the apex of the American lines, was the camp of Colonel Daniel Morgan’s rifle corps, with the light infantry of Major Henry Dearborn. They would be the first to sally forth to meet the approaching enemy.