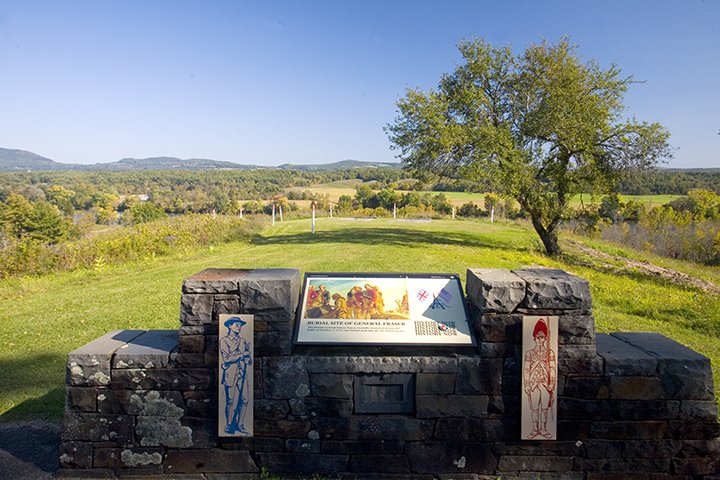 As you look at the picnic area in front of you, you will be facing east. You are welcome to use the picnic tables for cold meals or snacks, and caution you that no fires are permitted in this area. Barbecue grills are provided in the picnic area near the Visitor Center parking lot. The trail, which begins to the right of this parking lot, is a one-mile loop leading down below these heights.

A very picturesque section of the 1820s Champlain Canal is at the bottom, and wayside exhibits mark the British general hospital, artillery park, and the house where General Fraser died.

Though it is a pleasant and informative walk, the return will be steep enough to cause some visitors difficulty. Benches are provided for resting, but no drinking water is available on the trail. There are wayside exhibits just down the path to the southeast that indicate the second of three fortifications that made up what was known as the Great Redoubt.

After the battle of October 7th, Burgoyne’s army drew itself up into these works and the area immediately below, preparing to retreat northward. It was to a small house below, occupied by Madame von Riedesel, wife of the General, that Brigadier General Simon Fraser was taken after being mortally wounded in the Barber Wheatfield that afternoon.

Realizing death was near, he requested to be buried in the Great Redoubt the next day. Burgoyne complied with his trusted subordinate’s wishes, and in the company of his senior officers, attended the burial ceremony at sunset on October 8th, amidst a cannonading by the American guns.

The British army would begin its retreat to Saratoga, today’s Schuylerville, 8 miles to the north, that night, under the cover of a rainstorm. The rainstorm continued through the 9th of October.

As Burgoyne’s badly mauled army continued their retreat north through a sea of mud, General Gates’ soldiers drew and cooked rations and replenished their ammunition. On the 10th, the rain abated, and General Gates issued orders to start after the enemy. By 4 PM, they had arrived at Saratoga to find the British encamped on the heights beyond Fish Creek, entrenched and ready to defend themselves.

The American army then deployed to surround the British. A ring of 5 brigades under Generals Poor, Patterson, Learned, Nixon, and Glover pinned Burgoyne’s army against the Hudson from the west. Colonel Morgan’s riflemen blocked the way north. General John Fellows’ 3,000 militia occupied the east side of the river, preventing escape to that side. The remnants of the British army were under constant cannon and musket fire for the next 3 days.

On October 13th, General Burgoyne, on the advice of his subordinates, sent a message to General Gates proposing a “cessation of arms during the time necessary to communicate the preliminary terms by which, in any extremity, he and the army mean to abide.” The terms were agreed upon, and at 10:00 on October 17th, the British army marched out of its camp, carrying their arms in strict formation, as the musicians played the “Grenadiers’ March.”

On the parade, near the ruins of old Fort Hardy, the gallant soldiers of the Crown parked their cannon, deposited their muskets, and emptied their cartridge boxes in the presence of only two American officers. The “Convention Army” then crossed Fish Creek and marched between the lines of the victorious Americans, who showed not the slightest sign of disrespect.

At noon, General Burgoyne and his officers were escorted to General Gates’ marquee. Burgoyne removed his hat, bowed, and pronounced “General, the fortune of war has made me your prisoner.” Gates replied “You will always find me ready to testify that it was not brought about by any fault of your Excellency.” Then, in view of both armies, General Burgoyne stepped back, drew his sword, and presented it to General Gates, who received and returned it.

As the British army marched away into captivity, the principal officers of both armies retired to the marquee to dine. Thus would end one of the most dramatic episodes of the American Revolution. With the surrender of Burgoyne’s army at Saratoga, now Schuylerville, on October 17th, 1777, the first British to ever surrender in the field, the world would sit up and take notice.

Early the following year, the French court, convinced of the sincerity of the American quest for independence, and encouraged at their prospects of achieving it, would openly declare war on Great Britain. The subsequent flow of French arms, equipage, an army, and a navy would make possible the ultimate American victory almost 4 years later at Yorktown on October 19th, 1781. Saratoga would take its place in history as the “Turning Point of the American Revolution.”