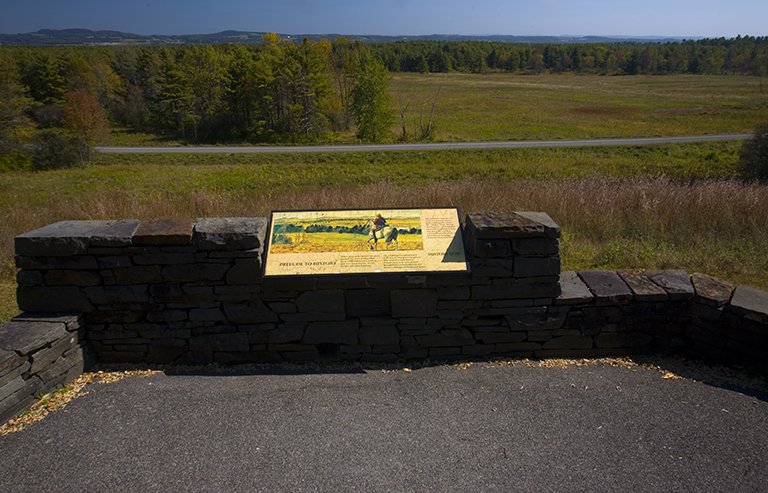 Step back in time to the fall of 1777. Two miles in front of you is the Hudson River. To your left, 8 miles up the river, is Saratoga, and the working estate of General Philip Schuyler. It’s Schuylerville today.

From this direction, advancing from the north, is General John Burgoyne, in command of 7000 British, German, Canadian, and Tory soldiers, and their camp followers. The artillery train consisted of 41 guns and mortars of various calibers.

His advance from the north, down the Richelieu River, Lake Champlain, to Skenesboro, through Fort Ann and down the Hudson River, was part of Burgoyne’s grand strategy. The plan called for the advance of two armies from Montreal to New York to effect a juncture at Albany. Such a move would establish a chain of strongpoints from the St. Lawrence to the Atlantic, isolating New England, the stronghold of the rebellion, from the rest of the colonies.

As the main army advanced towards Crown Point and Ticonderoga, Colonel Barry St. Leger would lead an additional force of 1000 Loyalists, Regulars, and Indians down the St. Lawrence and through the Great Lakes to provide a diversion on the Mohawk River.

To your right is Bemis Heights, occupied by the Continental Army, 7000 strong under Major General Horatio Gates. General Gates took over command of the Northern Department of the American Army on August 19th. By early September, he had matured a strategy for defeating General Burgoyne.

The army had moved northward to the heights behind Jotham Bemis’s tavern, where a bend in the river forced the road to Albany against the base of the hills. Here, under the direction of the 31 year old Polish engineer, Colonel Taddeusz Kosciuszko, the Americans built entrenchments that blocked the road and fortified the bluffs. The main line of entrenchments stretched from a ravine behind the bluff to the John Neilson farm on the crest of the heights, then southwest for ¾ of a mile.

Twenty two cannon were placed at strategic points. Pickets manned outposts north of the camp. Reinforcements arrived daily. The army would more than double in size over the next few weeks. The Americans were ready. The next step was up to Burgoyne.

As you leave the parking lot, make note of the ground cover and terrain along the sides of the tour road. The park lands today are managed according to a historic base map, and closely resemble their appearance of October 8th, 1777, the day after the Second Battle.